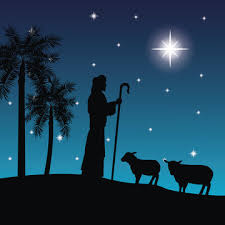 Merry Christmas! I love reading the Christmas story! Even though I have ready it numerous times, I enjoy the story and find something special about it each year. This Christmas season, the reaction of the shepherds comes to the forefront of my mind.

You know this episode well! The shepherds watched their sheep at night when an angel of the Lord appeared to them. They were terrified! But the angel calmed them and announced the birth of the Messiah. This was followed by the most amazing choir; a choir of angels singing, “Glory to God in the highest heaven, and on earth peace to those on whom his favor rests.” Wow! That must have been awesome.

I imagine that the shepherds were filled with joy and excitement! They went immediately to Bethlehem and found Mary, Joseph, and the baby who was lying in the manger. Then, verse 17 and 18 states, “When they had seen him, they spread the word concerning what had been told to them about this child, and all who heard it were amazed at what the shepherds said to them.”

The shepherds saw the Messiah! They were so filled with joy and excitement and wonder that they had to tell someone, in fact, everyone! They “spread the word” because the news was just too good to contain!

It is for the very same reasons and with the same heart-felt expressions that we partner with you to share the Good News of Jesus Christ! The Messiah has come! Jesus humbled himself to become humanity, lived a sinless life, and was obedient to the Father to the point of death; even death on the cross. Jesus rose from the dead and took his rightful place in heaven. He conquered sin and death and has all authority in heaven and on earth. What amazing news! We have to tell someone!

What an awesome privilege and responsibility we have to “spread the word” about Him to individuals around the world! It is with your partnership that we march diligently to our goal of presenting the Gospel to 100 million individuals. We are spreading the word in the nations of the world such as Afghanistan, India, China, Brazil, and Canada. We are spreading the word in multiple languages of the world such as English, Spanish, French, and Indonesian. We do this so God will receive glory!

“Glory to God in the highest heaven,

and on earth peace to those on whom his favor rests.”

Thank you for being such a vital part of the Network211 team. Our efforts are bringing people to Jesus and seeing lives transformed. May you have a wonderful and blessed Christmas as we continue to “spread the word” to individuals around the world!

See How Your Gift Can Make A Difference

You can have a part in reaching the world through a Global Evangelism Outreach today! See how your gift can have an impact.